ZEELAND, Mich., Oct. 26, 2021 /PRNewswire/ -- Design enthusiasts have long inquired about the availability of Herman Miller's graphic art library – storied collaborations with some of the world's most celebrated graphic designers and illustrators. Amy Auscherman, Herman Miller's Director of Global Archives and Brand Heritage has resurfaced a selection of the brand's "greatest hits," and today, the pieces are now available through Herman Miller and Design Within Reach's (DWR) online stores (both part of the MillerKnoll Collective). The posters will also be on display and available for order through Herman Miller and DWR stores across the country next month. 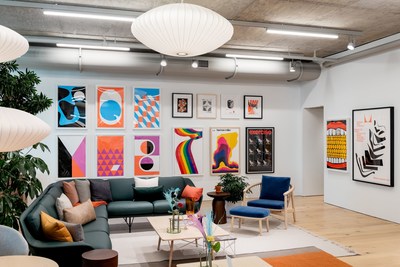 "Reintroducing Herman Miller's archival graphics as a collection has been a long-time dream of the brand," says Auscherman. "The posters and advertisements are always a favorite when we have them available for purchase, lend them to museum exhibitions, and have visitors at our archive in West Michigan."

"The graphics are timeless and approachable as art objects for any home or office, and we're excited to add the beloved designs to our expanding art category offering," says Debbie Propst, President of Global Retail for MillerKnoll.

This initial collection of fifteen resurfaced iconic designs spans from 1949 to 1979 and covers a host of product advertisements and brand nostalgia, beginning with Irving Harper's emotive Hardware Ad and concluding with Linda Powell's energetic Exercise Poster. Harper is credited with designing the original Herman Miller logo and was a member of designer George Nelson's specialized design team from 1947 to 1963.

Other George Nelson & Associates classics in the assortment include historical advertisements such as the Timeline, Four Coconuts and Coconut Chair in addition to the methodic Nelson Office Illustrations including Purple Triangles, Rectangles, Four Color Block, Blue and Black, Blue Dot, and Two Split Circles. The strong representation from this period at Herman Miller signals just how much Nelson's team contributed to the brand. Nelson was hired by Herman Miller in 1945 and in 1947 formed George Nelson & Associates, a group whose legacy includes the creation of the whimsical yet modern Nelson clocks, the luminous Nelson Bubble Lamps and the iconic Marshmallow Sofa.

While George Nelson and his team's dynamic products and graphics played a pivotal role in rocketing the Herman Miller brand to international acclaim, they were far from the only creative minds whose fantastical visuals have been canonized through Herman Miller's prestigious line of posters. No Herman Miller poster collection would be complete without at least one piece by Steve Frykholm, a Herman Miller legend who began his decades-long career at the company as its first ever internal graphic designer. His beloved Picnic Posters are unmistakable and can be found in art collections around the world, including the MOMA. His famous Corn Picnic Poster, created in 1970, was the first installment in the coveted picnic collection, and will be included as a limited-edition in this Herman Miller assortment. Armin Hofmann's Herman Miller Collection Poster will also be included as a limited-edition, with only 200 copies being printed of each.

Rounding out the collection are the two bright and colorful posters dubbed Rainbow Resources and Organic Forms, both designed by Phillip Mitchell under the creative direction of Frykholm, who was serving as Creative Director at Herman Miller at the time.

The sizing and material composition of each poster was carefully selected as the best choice to represent the vintage original.

"We closely referenced examples from the Herman Miller Archives to faithfully recreate these iconic pieces of graphic design," says Auscherman. "From color matching to paper selection, no detail was too small for consideration. It's exciting to now have this work recontextualized as art objects and accessible to design fans everywhere!"

Pricing for the assortment ranges from $475–$1,125 with frames available in white, black or maple. The collection will be available on October 26, 2021, at 6:30 a.m. EST for purchase at store.hermanmiller.com and dwr.com.

About Herman Miller
Herman Miller is a globally recognized leader in design. Since its inception in 1905, the company's innovative, problem-solving designs and furnishings have inspired the best in people. Herman Miller is guided by an enduring legacy of design, innovation, and social good. In 2021, Herman Miller and Knoll created MillerKnoll, a collective of dynamic brands that comes together to design the world we live in.

About Design Within Reach
Design Within Reach is your source for modern living. Founded in 1998 with a mission to provide access to the best in authentic design, the company curates classics from design icons and cultivates next generation talent to deliver an evolving breadth of product that can only be found at DWR. With a solution-oriented approach, the company offers the expertise and services needed to support the way people live today. Headquartered in Stamford, Conn., DWR sells its furniture and accessories to residential and commercial customers through retail Studios in North America, via the web at dwr.com, by phone at 1.800.944.2233. Design Within Reach, Inc., is part of the MillerKnoll collective.

About MillerKnoll
MillerKnoll is a collective of dynamic brands that comes together to design the world we live in. MillerKnoll includes Herman Miller and Knoll, plus Colebrook Bosson Saunders, DatesWeiser, Design Within Reach, Edelman Leather, Fully, Geiger, HAY, Holly Hunt, Maars Living Walls, Maharam, Muuto, naughtone, and Spinneybeck|FilzFelt. MillerKnoll is an unparalleled platform that redefines modern for the 21st century by building a more sustainable, equitable, and beautiful future for everyone.