OSLO, Norway, Sept. 30, 2021 /PRNewswire/ -- With pieces featured in collections around the world, Herman Miller (NASDAQ: MLHR) is no stranger to museums. This month, however, marked the start of a new chapter with a look at the brand's first ever chair specifically designed for a museum. At the 2021 Designer's Saturday event in Oslo, Norway, attendants were invited to take a sneak peek into the country's much-anticipated National Museum (officially opening June 2022) while also getting a chance to see the Portrait Chair, designed by Norwegian designer Andreas Engesvik and exclusively manufactured by Herman Miller, in the space it was originally designed for. 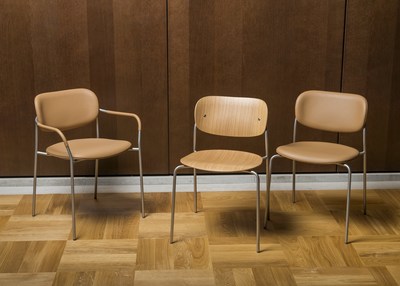 The origins of the Portrait Chair began four years ago, as part of an open competition sponsored by Statsbygg (the National Property Board), and co-organized with the National Museum of Norway. The competition brief called for a welcoming, multifunctional chair for use in the museum's many public spaces including all of the galleries, the Grand Hall, Prints and Drawings study rooms, restaurant and Lounge café. The process began with an open prequalification competition that attracted 26 applications. From these, 10 finalists were shortlisted, and their names were placed in sealed envelopes to preclude bias. A jury headed by British designer Jasper Morrison then worked to narrow the entries down to a final winner. When the plans for the Portrait Chair were ultimately selected, the remaining envelope opened to reveal Andreas Engesvik as the chosen designer.

In the same way a painted portrait aims to display the likeness, personality and even the mood of the subject, the Portrait Chair was designed to embody the essence of Norway. "The chair is charged with symbolic meaning," says Denise Hagströmer, Design Historian and Senior Curator of Design at the National Museum of Art. "It has an official identity, as it has, in effect, been commissioned by the nation, and it will be the chair present in the museum's key public spaces. It will be the museum's signature design object for contemporary Norwegian design culture."

The forms and lines of the Portrait Chair relate to the forms and lines of the seated human body, which makes the geometry of the chair naturally thoughtful and relaxing. In addition to the simple accents and natural materials that are common to contemporary Scandinavian design, Portrait's sinuous lines and universal forms bring forth the freer, more poetic aesthetic of its designer's native Norway.

"I wanted this to be a generous and comfortable chair, but I think it's also important, when you work in a familiar typology, to differentiate the design," says Engesvik. "The Portrait Chair builds on a familiar form (wood seat and backrest with tubular steel) but it has been carefully proportioned and visually softened."

"In the last couple of decades, Norwegian design has enjoyed increased international attention," says Hagströmer. "This was a golden opportunity for the museum to build on that by promoting contemporary Norwegian design. The Portrait Chair is sophisticated, taking its intended surroundings into consideration and manifests a design historical lineage at the same time as being extremely contemporary."

Once the design was selected, the process then turned to picking the company to manufacture the design. The open producer procurement procedure was also conducted by Statsbygg (the National Property Board). "They concluded that Herman Miller's century-long history and world repute stood out, as did Herman Miller's acute understanding of the nature of this commission and the importance of the collaboration with Statsbygg, the National Museum and Andreas Engesvik," says Hagströmer. "Further aspects that stood out include Herman Miller's competence, capacity and attention to quality, research and development, as well as their technical and environmental management."

"For me as a furniture designer, it's great recognition that an old and prestigious brand like Herman Miller will be manufacturing the Portrait Chair," says Engesvik. While this is Engesvik's first project with the Herman Miller brand, it's far from his first with the company. Engesvik has worked with other brands part of the MillerKnoll collective, including Danish design brand HAY and Scandinavian brand Muuto.

The Portrait Chair is available for purchase now as either a side chair or an arm chair with several different finishes and upholstery options through Herman Miller. The museum is planning to offer an exclusive finish option of the chair in their gift shop. Starting retail price is $630.00 USD. Despite several setbacks due to the COVID-19 pandemic, the Museum plans to open in June 2022.

About Herman Miller
Herman Miller is a globally recognized leader in design. Since its inception in 1905, the company's innovative, problem-solving designs and furnishings have inspired the best in people. Herman Miller is guided by an enduring legacy of design, innovation, and social good. In 2021, Herman Miller and Knoll created MillerKnoll, a collective of dynamic brands that comes together to design the world we live in.

About MillerKnoll
MillerKnoll is a collective of dynamic brands that comes together to design the world we live in. MillerKnoll includes Herman Miller and Knoll, plus Colebrook Bosson Saunders, DatesWeiser, Design Within Reach, Edelman Leather, Fully, Geiger, HAY, Holly Hunt, KnollExtra, KnollStudio, KnollTextiles, Maars Living Walls, Maharam, Muuto, naughtone, and Spinneybeck|FilzFelt. MillerKnoll is an unparalleled platform that redefines modern for the 21st century by building a more sustainable, equitable, and beautiful future for everyone.