ZEELAND, Mich., April 7, 2021 /PRNewswire/ -- Herman Miller (NASDAQ:MLHR) has announced that popular streamer Tim Betar (known as "Timthetatman" professionally) will be the brand's very first global Brand Ambassador. As an ambassador, Timthetatman will actively share his experiences using Herman Miller products and serve as yet another critical touchpoint between the prominent furniture company and the gaming community. 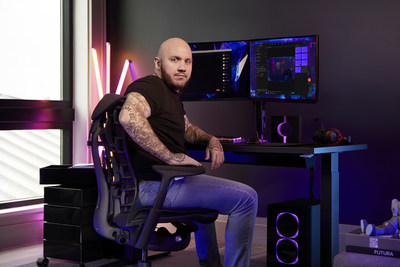 "This is a massive milestone for our team," says Jon Campbell, Director of Gaming at Herman Miller. "Since launching our first batch of gaming products in July, we have been incredibly humbled by the number of people who have chosen Herman Miller for their setups. We are thrilled to celebrate a partnership with one of the most influential and respected people in the gaming community, especially one that has been such a pioneer in this space."

"I'm extremely excited about this partnership because it shows that a big company like Herman Miller cares about what us gamers have to say," says Betar. "After streaming and sitting for long periods of time, I realized the importance of quality products and investing in them for your health. Once I switched to Herman Miller for gaming, I could immediately feel the difference!"

Timthetatman has been streaming since 2012, gaining millions of followers drawn to his inspiring skills, upbeat personality, and entertaining banter. Streaming popular games including World of Warcraft, Counter-Strike, Overwatch, and Fortnite, his skills and interest in a wide variety of games appeals to thousands of viewers every day. "Tim is one of the most entertaining content creators in the industry today," says Campbell. "I have always been inspired by Tim's decision to sit in Herman Miller chairs for almost his entire streaming career. This relationship is truly authentic, and we're excited to celebrate Tim's commitment to Herman Miller."

While Timthetatman will be a crucial part of the brand's efforts to continue to get to know the gaming community, the opportunities go well beyond introductions and endorsements. "We will be supporting Tim and his community through original content and exclusive product information, in addition to gathering feedback directly from Tim and his community for product design," says Campbell. "To truly deliver products to the gaming community that we feel proud of, we strongly believe we need players to be deeply involved. Opportunities like this allow their voices to be heard and give them a chance to influence the products they want and need."

"Gamers know what other gamers like. By including gamers like us and asking for feedback, you're going to get genuine feedback," says Betar. "The Embody chair is one of the best chairs there is. Watching Herman Miller take it and design it for gamers showed me that they really care and want to give gamers the best. I'm thrilled a company like that wanted to partner with me."

And while Tim is the first official global brand ambassador for Herman Miller's gaming division, he's far from the first streamer the team has worked with. "From the very beginning of this project, we've been partnering with teams and players to discover what they needed and wanted in a gaming chair," said Campbell. "Players have been using our chairs for years and we knew it was time to give them the attention they deserved--but we couldn't do that without actually involving them in every step of the process." That process included visiting Gaming Houses, interviewing players, conducting research with active players, and inviting players to be part of various launches.

"We gained critical insight and knowledge for our current gaming chairs from studying how players sit and play and talking with them about their experiences and concerns," said Campbell. "I can't wait to see what new findings are waiting to be tapped into through this partnership. We promised when we announced we were moving into the gaming space that this wasn't a one-time thing—we are here to stay. And staying means inviting more voices to the table, engaging in more conversations, and at the end of the day, delivering more quality products players can trust."

About Herman Miller
Herman Miller is a globally recognized leader in design. Since its inception in 1905, the company's innovative, problem-solving designs and furnishings have inspired the best in people wherever they live, work, learn, heal, and play. In 2018, Herman Miller created Herman Miller Group, a purposefully selected, complementary family of brands that includes Colebrook Bosson Saunders, Design Within Reach, Geiger, HAY, Maars Living Walls, Maharam, naughtone, and Nemschoff. Guided by a shared purpose—design for the good of humankind—Herman Miller Group shapes places that matter for customers while contributing to a more equitable and sustainable future for all. For more information visit www.hermanmiller.com/about-us.

About TIM THE TATMAN (Tim Betar)
Tim "Tim The Tatman" Betar is one of the most influential Twitch personalities with over 6.1M followers and 229M total stream views. Known for playing Call of Duty: Warzone, Valorant, Overwatch, World of Warcraft and Fortnite, Tim's variety channel reaches an average of 36K viewers per stream and often reaches over 100K concurrent viewers. His boisterous personality and positive attitude have amassed one of the largest interactive communities on the platform. His loyal following recently launched him to #1 trending on Twitter after he finally won Fall Guys, a game he famously struggled to beat. Capturing the hype around the victory, ESPN released a 30 for 30 dedicated to the story of Tim's win. Shortly following, Tim competed in a gaming tournament on Twitch called Battle of the Best, which was the platform's most successful branded tournament stream ever. Tim headlined the event and drove 9M views, 90M minutes watched and a peak of 215K concurrent viewers.  Beyond Twitch, Tim is a content creator with over 2.7M subscribers and 421M total views on his YouTube channel. Without a doubt, he is a leading voice in gaming.