Apollo also rejected DISH's offer to extend the current contract, with payment, to keep the channels available to customers through NFL playoffs and the Super Bowl.

Two issues are at stake:

This is the second major blackout Northwest has initiated in the past year, blacking out its channels on DirecTV for eight months in 2019.

Apollo is a private equity investment company, managing assets of more than $300 billion.

"Apollo doesn't care how high a customer's bill gets. It's trying to squeeze every last penny out of consumers to recoup the billions it spent buying these stations," said Andy LeCuyer, DISH senior vice president of Programming. "They are fund managers built to serve wealthy private investors, not local viewers. For Apollo it's about a number. For DISH it's about customers."

DISH was granted a temporary restraining order by the Circuit Court of Cook County, Illinois, to prevent Apollo from blacking out 14 local Cox channels.

"Apollo's attempt to rip up an existing multiyear contract with DISH that was signed just last spring is like a bank taking over a mortgage and then increasing the homeowner's monthly payment," said Andy LeCuyer, DISH senior vice president of Programming.

In exchange for using the public airwaves, broadcasters provide their channels for free, accessible with a digital over-the-air antenna; however, pay-TV companies are required to pay broadcasters to provide those same channels to their customers. If the two parties do not reach an agreement, the pay-TV provider must stop delivering those stations.

More information on this FCC-mandated process is available here: https://www.fcc.gov/media/policy/retransmission-consent

As consumers enter the NFL conference championship weekend, Apollo blacked out the stations, using its own viewers as leverage.

"Apollo intentionally delayed negotiations and purposely chose NFL Championship weekend to remove its channels, to inflict maximum pain for consumers. The channels could come back today if Apollo would give us the green light," added LeCuyer. "On behalf of customers, we ask Apollo to stop punishing its own viewers so we can focus on reaching a fair deal."

Affected DISH customers can view NFL games using an over-the-air antenna or stream local and most primetime games for free on mobile phones and tablets as announced by the NFL.

As DISH works to reach an agreement, the company is offering free digital over-the-air antennas and free installation to qualified DISH customers in the affected markets. Customers who use a digital antenna are able to access news, sports and popular network shows, and have the option to completely drop local channels from their programming package to save $12 on their monthly bill.

DISH will install an antenna for qualifying customers in affected markets based on the expected reception available at their home. Local station availability over the air is dependent on geographic location and topography. Consequently, some customer locations may not qualify for an antenna installation.

"A digital antenna is a great experience and solution for a growing number of customers," continued LeCuyer. "The channels integrate seamlessly into the Hopper interface. Plus, switching to antenna-delivered locals can unlock $144 savings annually. We want to give customers the choice to save money."

Each year, the cost to carry local broadcast stations rises far beyond the rate of inflation, leading to blackouts across the country that affect millions of subscribers of various pay-TV companies. According to Kagan, a leading source on the media industry, broadcast fees burdening pay-TV consumers are expected to reach an unprecedented $16.3 billion in 2024. These same rates, for channels available free over the air, were as low as $215 million in 2006. Between 2006 and 2019, retransmission consent fees have risen 5,359 percent, with an average annual increase of 37 percent across the pay-TV industry. The cost to deliver local channels is the fastest growing part of consumers' monthly pay-TV bills.

Along with other pay-TV companies, independent programmers and public interest groups that form the American Television Alliance, DISH has called for the U.S. Congress to revamp the out-of-date laws that favor these high fees and unnecessary blackouts.

Since 1980, DISH has worked on behalf of consumers to deliver innovation and value. Through its subsidiaries, the company provides television entertainment and award-winning technology to millions of customers. DISH Network L.L.C. is a wholly owned subsidiary of DISH Network Corporation (NASDAQ: DISH), a Fortune 250 company. Visit www.dish.com. 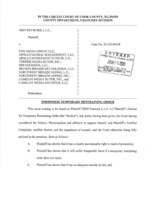