Skip to main content
Addict at 11, activist at 16: Drug Story Theater cast member Emily Hamilton is in the role of her life
Peter Gelzinis

Visit Blue Cross' new health news site, Coverage, for compelling original reporting on health and wellness issues. Sign up to get our weekly headlines in your inbox!

This year, veteran news columnist Peter Gelzinis is chronicling the journey of Emily Hamilton, from childhood substance use to a lifesaving connection with the groundbreaking Massachusetts recovery program Drug Story Theater. Following is the first installment of this special BCBSMA News Service series.

At 16, perhaps it’s a bit soon to know if Emily Hamilton will become the hero of her own life. But Charles Dickens might well agree that she sure is pointed in the right direction.

Like many a hero, her journey has not been easy.

When you begin drinking at 11 and move on to having a friend slip you Adderall on the bus to school, and when you’ve spent time in various treatment and mental health facilities before your 15th birthday, life may seem like an epic tale with an inevitably sad ending.

She grew up in a family where many struggled with substance use, and she grew up with a hunger to connect with others.

And then, one day, “it was me and a friend, we were young, maybe 11 or 12, like really young, way too young to be getting involved in any drugs or stuff like that. So, I was at her house, we were in the bathroom, she’s doing my make-up and I went through the medicine cabinet above her sink and took some Adderall pills.

“Eventually, she kind of found out what was happening and started giving them to me on the bus on way to school. And it sort of started from there.

“Then it kind of became like a solo thing where it was just me drinking alone, or me smoking alone and that kind of stuff, because I just wanted to forget. It’s like there wasn’t much I wanted to remember at the time, because my head was always racing with anxiety and depression.

"I was just getting so high I really didn’t remember what happened the next day.

“I do remember after every time taking Adderall, every time … feeling awful, and regretting doing it.”

The drug use, and the aching sense of emptiness and despair, eventually led to Emily being hospitalized.

It was the time Emily spent in recovery at High Point Treatment Center in Middleboro that helped her understand the connection between the substance use in her family and the gnawing feelings of anxiety and depression that haunted her.

“Going into the mental hospital was really, really hard…and I’ve been there a few times,” she says. “I was 13, I was the youngest kid there. It’s not easy at all. It’s scary and it’s lonely, but that’s what I needed to kind of stabilize myself. They have their eyes on you all the time to make sure you don’t hurt yourself."

The stints in the mental hospital were followed by what Emily called “real treatment” in a community-based acute treatment residential facility where she lived with other teens. She credits time spent here with the “tough love” she needed.  “It changed me a lot.”

And then she entered a program called Clean And Sober Teens Living Empowered, or CASTLE, under the direction of Dr. Joseph Shrand. 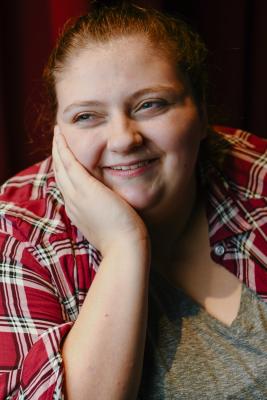 “I had opened up to Dr. Shrand about drinking and taking pills,” Emily said, “and he thought I might be a good fit for his Drug Story Theater.”

An instructor of psychiatry at Harvard Medical School, Shrand also happens to be an original cast member of the 1970s-era PBS show “Zoom.” Drug Story Theater is the fusion of his love of children’s theater with his knowledge of how the adolescent brain functions.

The group teaches improvisational theater techniques to teens in the early stages of recovery from drugs and alcohol, and helps them craft their own unique stories into plays which they perform before middle, high school and college audiences around Massachusetts, under a partnership with Blue Cross Blue Shield of Massachusetts.

“Our performances explore the science of the adolescent brain and why it’s at greatest risk for lifelong addiction,” Shrand says

Today, there is a kind of hard-won wisdom behind the radiance of Emily Hamilton’s smile. Her struggle to find and maintain her sobriety has left her older than her years.

Yes, she is the teen with the part-time job and the dream of going to college and of being a role model for her younger sister. But Emily Hamilton is also the survivor of a battle with the kind of demons that don’t let go.

Her journey of self-discovery has taught her that clinicians can provide treatment and programs, but ultimately each person – each hero - has to make that commitment to change.

She knows that she may not be able to convince other loved ones that staying sober is worth the struggle.

Next in our series: Emily experiences the pain and power of starring in her own life story in Drug Story Theater.